What people are saying

A review from Robert Brokenmouth from the i94 Bar website 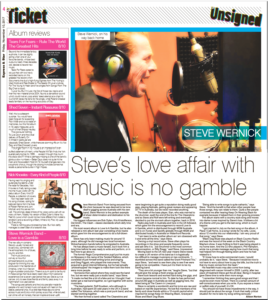 “After listening to ‘Love is a Gamble’  I definitely felt a sense of songs that actually mean something to the writer, making it a work of substance in this time of cookie cutter nursery rhyme music.  Upon seeing the single/video for ‘Keep On Wearing Black’ with the weaving violin part, acoustic guitar, vulnerable lyric and voice was left with a sense of some of the beat poet greats as Dylan and Waits.
Defiantly original, Steve Wernick is a refreshing take on an old school genre.”

“The Steve Wernick Band blends styles to create their own genre, a mix of blues and rock with pure poetry thrown in the mix.”

“Love is a Gamble” is highly recommended.”

“Steve Wernick’s new album “Love is a Gamble” is terrific and I am very pleased to be working on it with him.  If you like Dylan, The Waterboys, Joe Strummer, Billy Bragg and Paul Kelly chances are you’ll find something to like on this album”

“Love Is A Gamble  by The Steve Wernick Band has folk, rock, country and swing influenced songs that are well constructed and arranged, performed in a  unpretentious, heartfelt way.”

“Wernick’s gutsy, passionate yet tender lyrics, combined with Knudsen’s, volcanic riffs on guitar and smooth back-up vocals (and beautiful artwork), with talented guest musicians on tracks, ‘Talent To Burn’ kicks ass.
A rare blend of beat poets, punks, raconteurs and troubadours of today, Wernick and Knudsen are not just another grass-roots band. They ooze STREET CRED.”

“It’s a fine piece of work gents – loving the Englishness of it & hearing some interesting reference points, to these ears, from Dylan to Ian Hunter. Good to hear someone with a sense of social justice making a fist of it too. Good stuff & the best of luck with it all.”

“Talent to Burn album is a fabulous expression of rock n roll folk fusion that hits the mark. In particular the Devil and the Deep Blue Sea is the modern theme song of today’s refugee plight that keeps you listening. This album holds no punches and keeps the beat long after you hear the songs. Hit after hit you will come back for more. Steve and Rolfe have made an album to be proud of!’

“Good musicians behind vocals, a modern folk feel. Lyrics of today insightful and real. Great storytelling, a clear salute to his idol Bob Dylan. Steve should release many more just like this, Talent to burn hits home!”

“At first when I heard it playing, I thought it was Billy Bragg, then Paul Kelly then when I was told it was new artists Steve and Rolfe I was impressed and still felt like I was listening to one of the classic older bands that had put out a new album. Love the catchiness of the songs. Nice one boys.”

“An interesting intro to a rather unique song on “Open Heart, Open Mind”,  the culmination of instruments alone are incredible at displaying genre accompanied by a low pitched, husky voice gives a folk genre feel. The accompaniment of a strong accent of string instruments gives the track a steampunk style genre. The lyrics are very good at conveying the common person; and rhyme well with the backing track. I really like this song, personally, but there isn’t that many people who are aware if the steampunk genre – but if this song was made more public, I am sure a lot more people would appreciate this style of music. ”

“When listening to this, i imagined this song being in the opening titles of a feature film. A song for a drama, mystery or horror comedy. It has this sly, sneaky feel to it. It’s got a wonderful rhythm and if I started making films again, this is a song I would use.”